Raft is in nature a Paxos-based distributed consensus algorithm that is much easier to understand than Paxos. Unlike Paxos, Raft divides the protocols into independent modules, and uses a streamlined design, making the Raft protocol easier to implement.

Raft adopts a more streamlined design by preventing reordering commits, simplifying roles (it has only three roles: leader, follower, and candidate), allowing only the leader to write, and using randomized timeout values to design leader election.

To summarize, a strong leader tells its followers: “Do not say anything. Do what I said and let me know when you finish!” In addition, a leader must always remain active by sending heartbeats to followers. Otherwise, a follower will take its place. 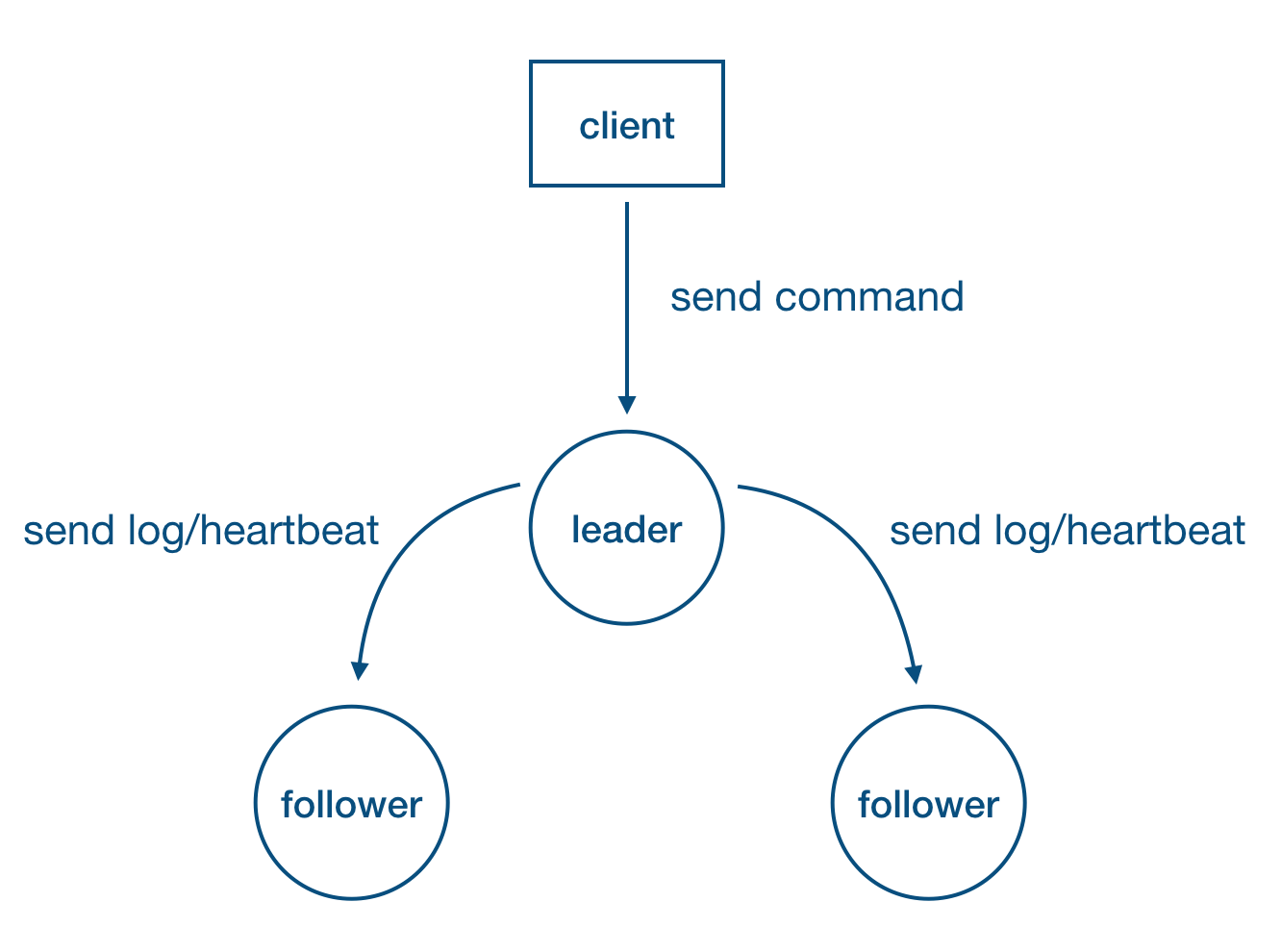 Assume we have an infinitely incrementing sequence (system) a[1, 2, 3…]. If for any integer i, the value of a[i] meets the distributed consensus requirement, the system meets the requirement of a consensus state machine. Basically, all real life systems are subject to continuous operations, and reaching consensus on a single value is definitely not enough. To make sure all replicas of a real life system are consistent, we usually convert the operations into entries of a write-ahead-log(WAL). Then, we make sure all replicas of the system reach a consensus on the WAL entries, so that each replica performs operations of the WAL entries in order. As a result, the replicas are in consistent states.

Three roles/states of a Raft node 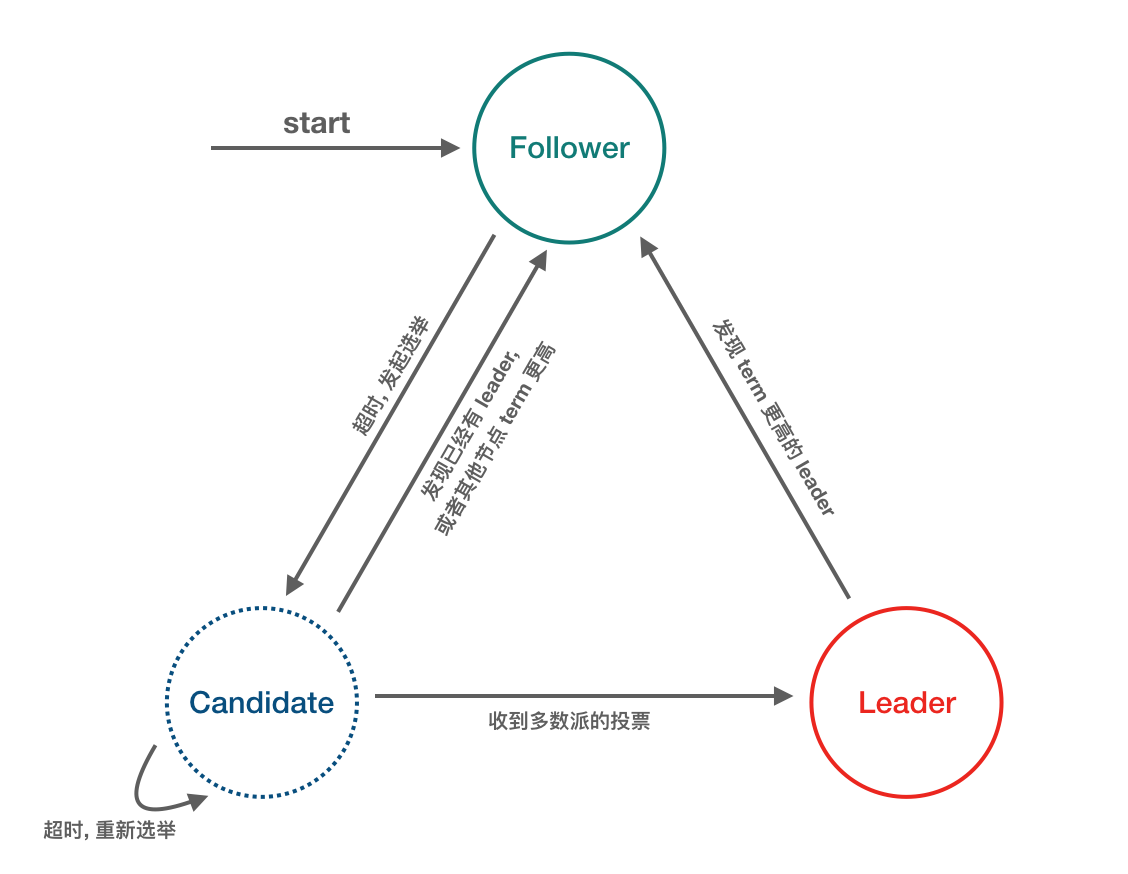 Summary: What can we do with Raft now?

JRaft a production-level high-performance Java implementation based on the RAFT the consensus algorithm. It supports MULTI-RAFT-GROUP and is suitable for high-load and low-latency scenarios. JRaft allows you to focus on your own business area, and leave all RAFT-related technical problems to JRaft. JRaft is easy to use, and you can master it in a very short period by reading a few examples.

JRaft was transplanted from Baidu’s Braft, upon which we have made some optimization and improvement. Many thanks to the Baidu Braft team for opening source such an excellent C++ RAFT implementation. 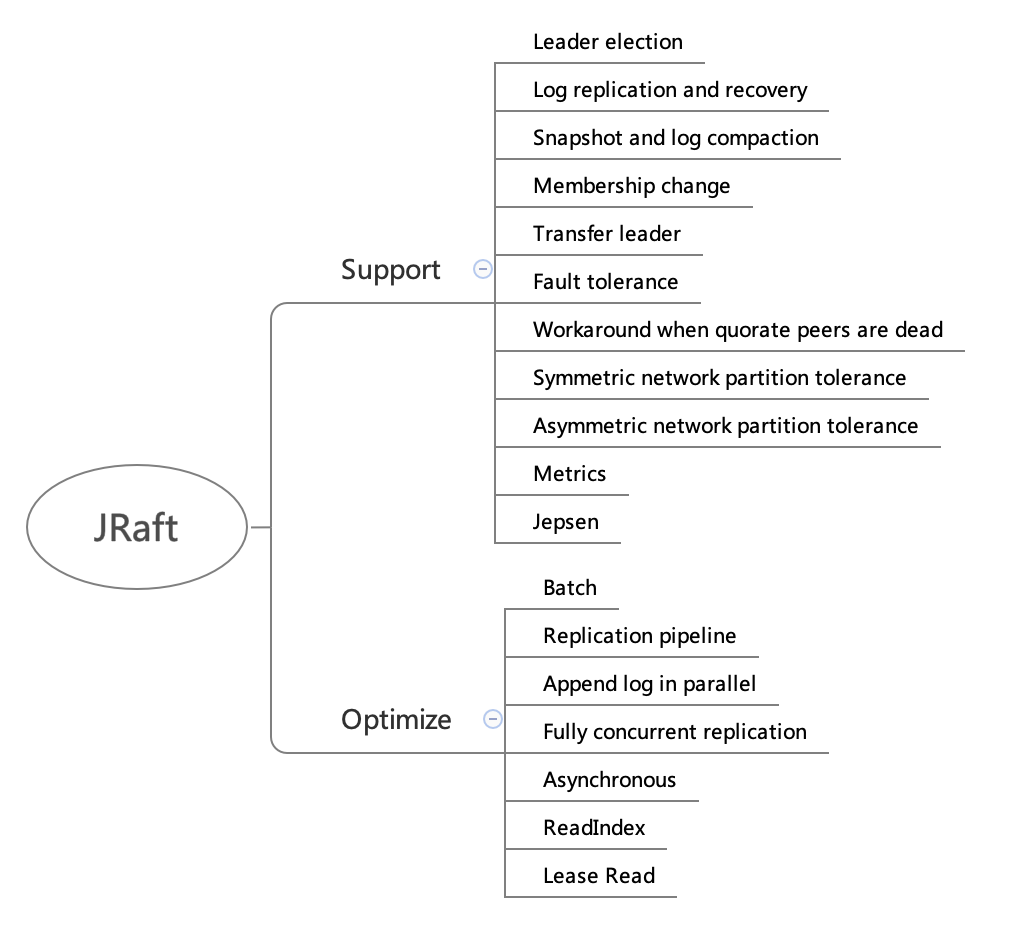 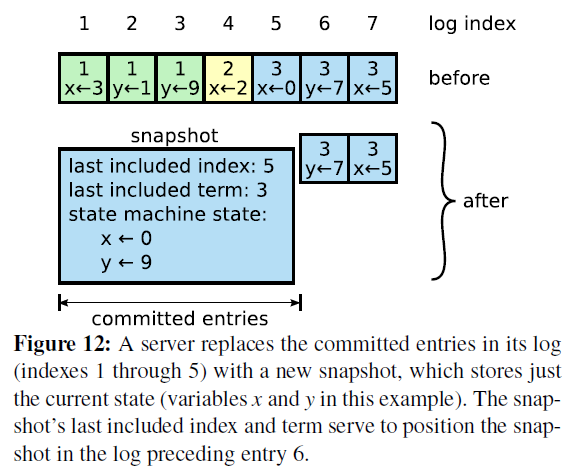 As shown in the above figure, S1 is the current leader. Due to a communication failure caused by network partitioning, follower S2 did not receive heartbeats from the current leader. It transitions to a candidate and constantly increments its term in attempts to start a new election in the cluster. Once the communication is recovered with network recovery, S2 will start a new election in the cluster, force the current leader to step down, and cause service interruption. To avoid this problem, JRaft introduces a pre-vote mechanism. - In JRaft, a follower must issue pre-vote RPCs (currentTerm + 1, lastLogIndex, lastLogTerm) and obtain votes from a majority of nodes before it can turn into a candidate and issue real RequestVote RPCs. Due to a network failure, a partitioned follower node cannot issue pre-vote RPCs to other nodes, and cannot win the pre-vote. Therefore, it will not be able to transition to a candidate to start a new election. This reduces the chance of service interruptions caused by unnecessary leader election.

As shown in the above figure, S1 is the current leader. The communication between S1 and S2 fails due to network partitioning, but S2 is still able to communicate with follower S3. Therefore, S2’s pre-vote RPC is responded by S3, and wins the majority vote to transition to a candidate. S2 constantly triggers timeout elections and increments its term, while sending RequestVote RPCs to S3. As a result, S3 increments its term to keep consistent with the term of S2, which is higher than the leader’s term. This causes S3 to reject log replication from the leader. - Every follower in JRaft maintains a local timestamp to record the time of AppendEntries RPCs (including heartbeats) from the leader. A follower can only accept pre-vote RPCs after the election timeout.

In addition to functional integrity, JRaft has done a lot of performance optimization. Here is some benchmark data of a KV scene (get/put). With small data packets and a read/write ratio of 9:1, when linearizable reads are guaranteed, a three-replica cluster can achieve up to 400,000+ ops.

A single JRaft node is meaningless. See the architecture diagram of a three-replica JRaft cluster as follows. 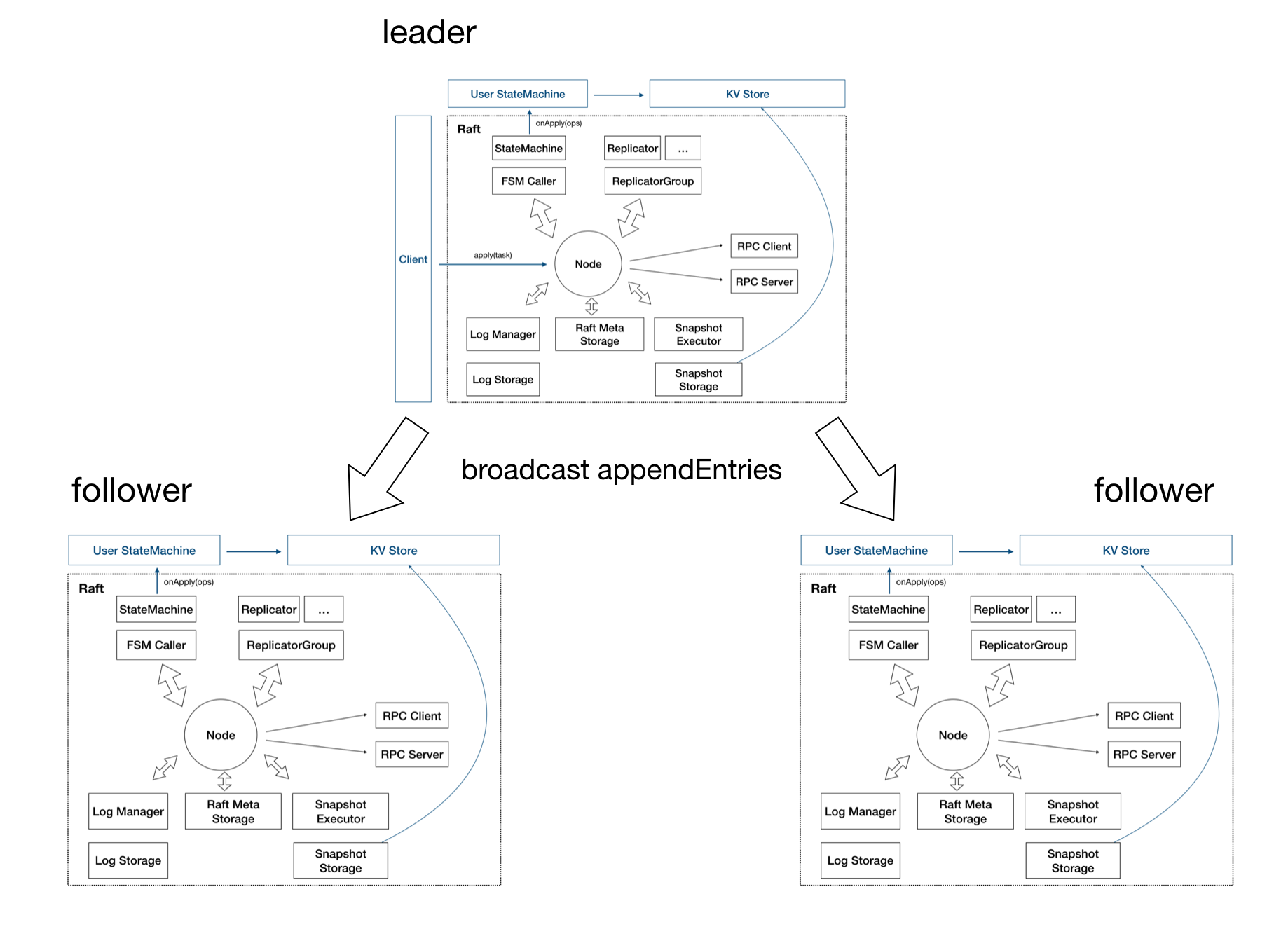 As shown in the above figure, clients A, B, C, and D all satisfy the requirement of linearizable reads. Client D may seem to be a stale read, but it is not. The request of client D crosses three stages, but the read can occur at any time, so it can either read one or two.

Important: The following discussion is based on a precondition that the implementation of the business state machine meets the requirement of linearizable reads, or the Java volatile semantics.

Example code for initiating a linearizable read request in JRaft:

1. Design a simple KV Store based on JRaft 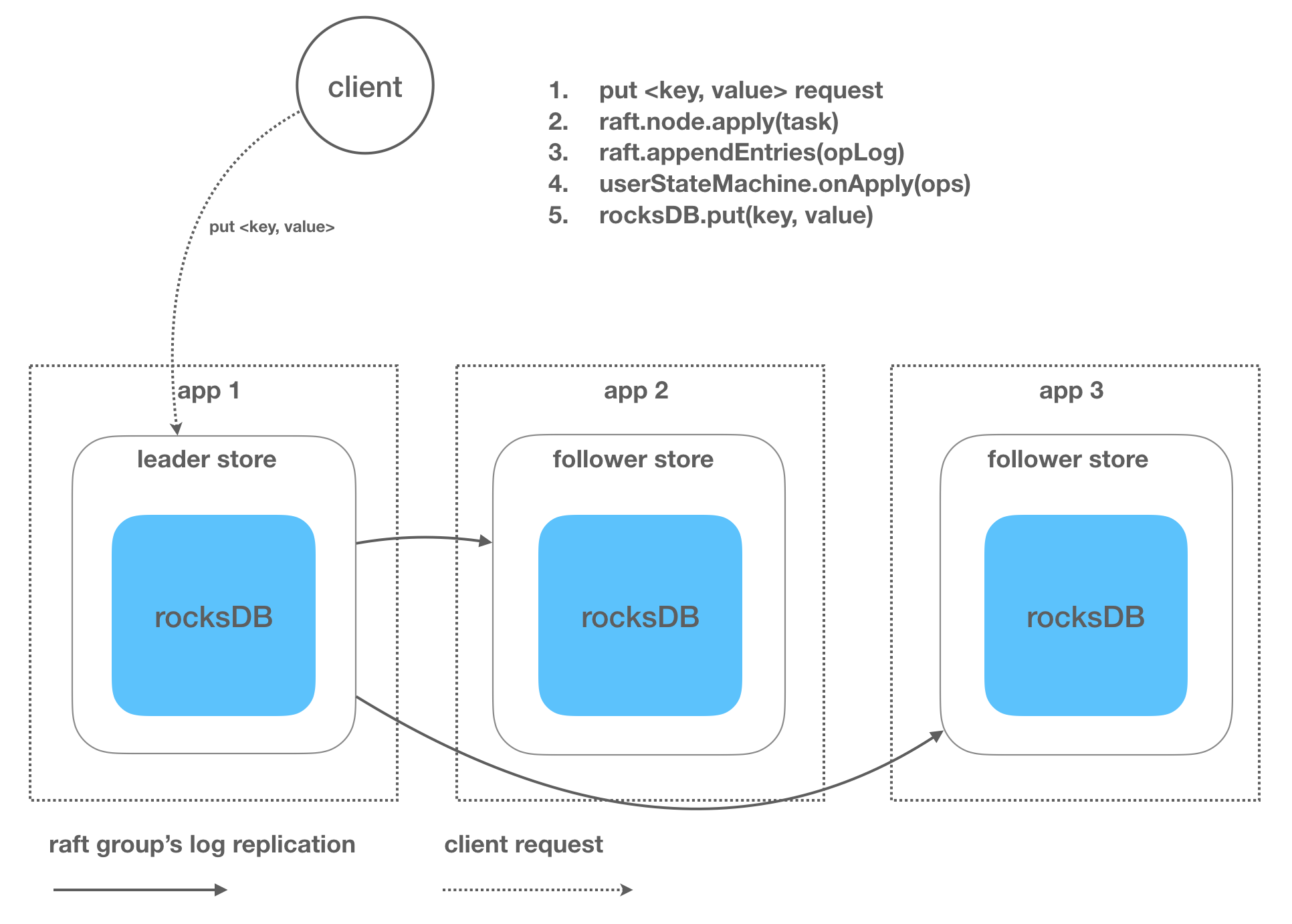 PD: The global central master node that is responsible for scheduling the entire cluster. You do not need to enable PD for clusters that do not require automatic management. A PD can manage multiple clusters, with each of them isolated by clusterid.

Store: A physical storage node within a cluster. A store may contain one or more regions.

Region: The minimal KV data unit. Each region has a left closed and right open interval [startKey, endKey), which supports automatic split and automatic backup migration by metrics such as request traffic, load, and data volume.

The above characteristics, especially the second and the third, are basically implemented based on JRaft’s own features. For more information, see JRaft documentation.

Many thanks to outstanding Raft implementations, including Braft, Etcd, and TiKV, which have benefited JRaft a lot.

Ant Financial Middleware has been looking for talents who have a passion for basic middleware (such as message service, data middleware, and distributed computing) and the next generation high-performance time-series database for real-time analysis. If you are interested, feel free to contact boyan@antfin.com.